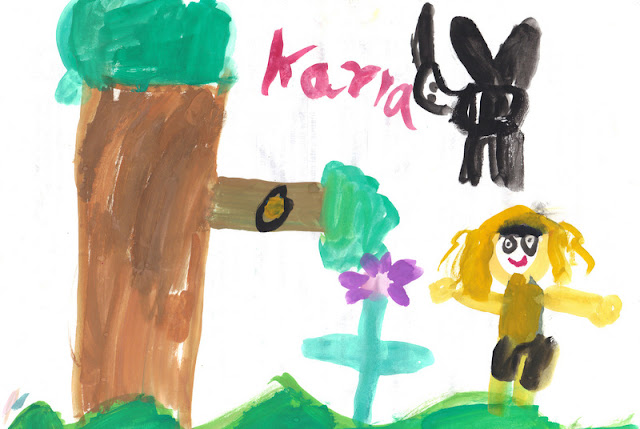 Isn’t the above picture amazing!!? It was painted by Karra, a Year 1 student from Mundaring Primary, and it shows her depiction of our nest box program undertaken at her school today. The detail young people pick up never ceases to amaze us - there’s a tree with a hollow in the branch, a bird’s egg inside, a Black Cockatoo flying to the tree, and a tall, dreadlocked man with bandanna, khaki t-shirt and black shorts standing nearby, who looks the spitting image of Simon!
We were both very touched to receive such a drawing from a cute student who only attended the powerpoint presentation during our first hour at the school, and wasn’t directly involved in the box-building. Obviously she still gained a lot! It’s moments like this that make us realise what we do this work for! If any other students from Mundaring Primary would like to comment on the day or let us know what is using their boxes we would love to hear from you. There is a comment section below just for you!

Today was a brilliant day which began when we arrived at the school and Simon noticed this incredible mural, which he thought was such a beautiful thing to have at a school. It even has a Red-tailed Black Cockatoo, one of the species we are targeting with our nest boxes! 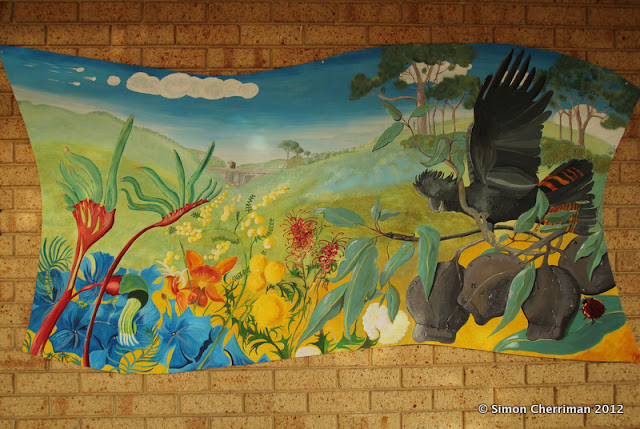 We kicked off the education session with our usual classroom presentation to about 50 students of various ages who learnt about tree hollows, nest boxes and the importance of recycling more than just the conventional waste. We then jumped straight into the box building with a smaller group of Year 4/5 students in the undercover area, and most groups had their boxes nearly complete by recess. After recess the kids added the finishing touches to their boxes, and we all gathered out in the open to begin painting. We were very lucky to have some nice shade provided by a huge Marri tree right in the school grounds. Painting is always a messy affair but believe it or not, the kids still managed to get some paint on the boxes! Soon they looked like brand new and after leaving them to dry during lunchtime they were ready to hang. 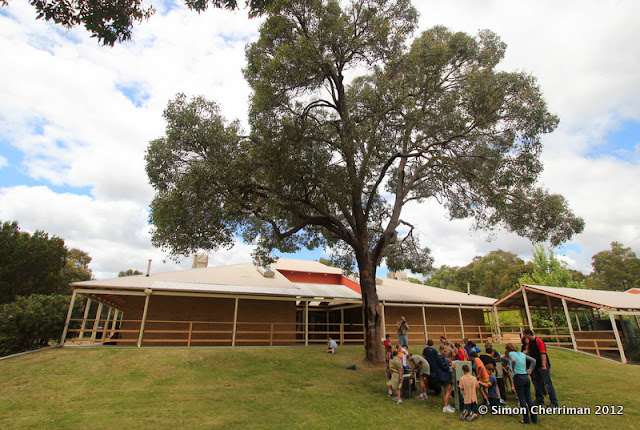 Gill took our Year 4/5’s on a walk around the school grounds to see what nest hollows were already available for local birds, and to select some suitable sites for our new boxes. Simon took this opportunity to prepare the boxes for hanging by adding wire and chain to them, and get his climbing gear ready. Gill and the students found that a couple of large Marri trees already had some local parrots inside, as well as the dreaded feral Honey Bee, which is a threat to local wildlife. They also found an ENORMOUS Marri tree at the front of the school which amazingly appeared to have no hollows, a perfect spot for a box!

We began with one of the large cockatoo boxes and got all the students to sign their names on the front before the box left the ground. A few more classes came to watch as Simon then set up ropes high into the tree and hoisted the box about 10m to a suitable fork. He just managed to get the chains in place and the box in position when the siren rang, and all the kids were then ready to go home. 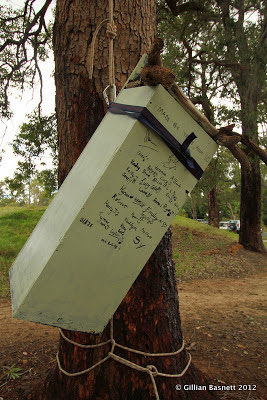 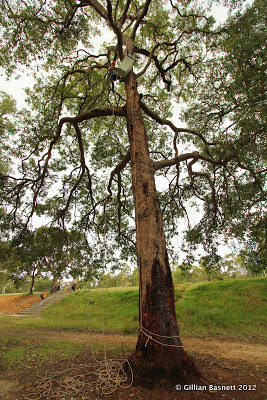 Thanks to the fantastic Dr. Julie-Anne Ellis for contacting us early in 2012 and arranging this activity several months ago. Also, we can’t forget the hard work of the kids involved in making the boxes so beautifully, and our sponsors. Thank you all!

The projects are very useful for the students because due to that we can learn lot of things which are helpful for us. You can get online assignment help australia to write thesis work. The projects should be on how to recycle the plastic these types of projects become helpful to resolve the issue.